Eleanor Ross Taylor, who I guess is pushing 90, recently won the Ruth Lilly poetry prize. The current issue of Poetry has a bunch of her stuff, some of which is enjoyable. For instance,


And the happiness of  the unconscious
is scurrying already
from the knife-edge of   light,
pain’s night-light,
waiting under the door across the hall.

Dread’s square hair stiffens,
her feet have corners,
trying to trick the stairs out of their creaking,
and the house out of  groaning before coffee,
before resurrection.

Death before resurrection is hard;
breakfast and the stars belong first;
plenty of  time to die all day
when everything does groan, and unhappiness
shakes itself out like a musty old mare
all over the house.
(from "Pain in the House")

I also enjoyed "The Young Writer's Reply," "Kitchen Fable," and "Against the Kitchen Wall."
Posted by Zed at 1:55 PM No comments:

From a new review article on the anomalous Hall effect:

The first discovery provided a simple elegant tool to measure carrier concentration in nonmagnetic conductors and played a midwife’s role in easing the birth of semiconductor physics and solid-state electronics in the late 1940s. For this role, the Hall effect was frequently called the queen of solid-state transport experiments.

The associative bridge here seems to have been that both midwives and queens are female. On the other hand there's something pleasantly grotesque about the logic here: you must be the queen, you're covered in someone else's bodily fluids.
Posted by Zed at 10:58 AM No comments:

David Bromwich's anti-Obama rant in the LRB is very good. Some excerpts follow.

On Obama's relationship with the rich and famous:

He was new to the national elite and enjoyed his membership palpably. This came out in debates and town meetings where he often mentioned that the profits from his books had lodged him in the highest tax bracket. It would emerge later in his comment on Lloyd Blankfein and Jamie Dimon, the CEOs of Goldman Sachs and J.P. Morgan: ‘I know both those guys; they are very savvy businessmen.’ One can’t imagine Franklin Roosevelt or John Kennedy saying such a thing, or wanting to say it. They had known ‘those guys’ all their lives and felt no tingle of reflected glory. Obama has not yet recognised that his conspicuous relish of his place among the elite does him two kinds of harm: it spurs resentment in people lower down the ladder; and it diminishes his stature among the grandees by showing that he needs them.

A spontaneous ability to laugh at oneself, or to make a witty remark that doesn’t wound, is always appreciated in a politician, but it has not been given to Obama. His self-depreciation is stiff and rehearsed, and his cutting comments always sting. His equability in interviews has partly concealed this defect from an admiring press; the radio shock-jocks make more of it, and dwell on his superior airs. When Obama feels edgy or tired, his manner turns condescending and priggish. It is at just such moments that he seems most heartily one of the elite. His saying to Hillary Clinton in an early debate when she called Obama likeable, ‘You’re likeable enough, Hillary,’ was an early example of the propensity. He did it again in the healthcare summit when John McCain was making heavy weather of the campaign promises Obama hadn’t kept, and Obama, where no response was necessary, chose to say: ‘Let me just make this point, John, because we’re not campaigning any more: the election’s over.’ Before the putdown, McCain had looked small and confused – there was dead air all around him – but Obama by his response awarded him the pathos of a beaten man. An oddly unpleasant schoolmasterish moment.

the delay in the closing of Guantánamo might be supposed an effect of sheer miscalculation, except that it so plainly falls in with the Obama style. Obama is unique among politicians in running out the clock when there are many minutes left on it and he is not ahead. He did that on Guantánamo. He did it with Israel-Palestine when he required a settlement freeze and then assumed, if he waited long enough, Netanyahu would grow amenable. He did it and still is doing it with Iran...

He is, by nature, a man of tendencies rather than commitments.He would like things to improve for everyone, even for the rich, but especially for the poor because they need it. Yet he shuns the language of economic equality. He is a Fabian non-socialist. Libertarians are right to see him as an outsize admirer of legitimate authority who relies on state power far too much and too implicitly.

Why coffee stains are ring-shaped 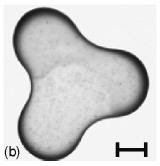 There's a group of clever people at the James Franck Institute (UChicago) who study some of the overlooked and bizarre regularities of everyday life -- e.g. Tom Witten, Sid Nagel, Heinrich Jaeger, and Wendy Zhang. Their work has always struck me as very beautiful and "classical" in its spirit: it is the sort of thing the founders of the Royal Society, or for that matter Euler or the Bernoullis, might have studied and would have appreciated. They work on things like the flow of sand out of thin nozzles, the fact that liquids do not splash on top of Mt Everest, and the extent to which a droplet of water that pinches off a nozzle remembers the shape of the nozzle.

An esp. nice result that I heard about at a talk yesterday was Witten's group's theory of why coffee-stains have the sharp-edged, ring-like shapes they do. [The relevant references are Nature 389, 827 (1997) and Phys. Rev. E 62, 756 (2000).] The answer goes something like this: the edge of the coffee-bearing water droplet snags on surface roughnesses and gets pinned. (On sufficiently smooth surfaces, e.g. Teflon, coffee stains are not ring-shaped but uniform.) As water evaporates the bubble has to shrink; the water evaporates at roughly the same rate everywhere so ceteris paribus the bubble would want to shrink everywhere, but it can't because that would decrease its diameter and require the edge to move, and the edge can't move because it's pinned. The only way to keep the edge where it is while all of the surface evaporates at the same rate is for fluid to flow from the center of the droplet to the edge, to replenish the water lost from the edge. So over time most of the water in the bubble evaporates from the edge, and most of the solute gets deposited at the edge, so the stain is ringlike.

Under certain conditions, the edge is "almost" pinned but periodically unsnags ("depins"), moves some distance, and then snags again; this leads to terrace-like stain patterns. 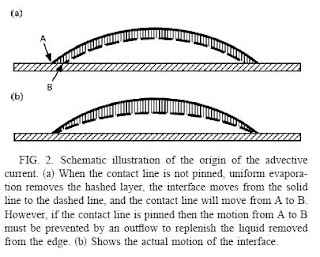