"Everything reminds Judis of the white working class"

John Judis of the New Republic is a hack. Perhaps as a consequence, he is a respected and influential pundit; there's something about specious, easily refutable narratives that appeals to the collective unconscious of the pundit class. Judis's general shtick is to interpret all of national politics in terms of the "white working class," and his general approach is to vulgarize the sociology (making working-class whites out to be more racist and homogeneous than they are) and misrepresent the data. Jay Cost dismantled his "realignment" theory in 2007. I tried to test his theory about racism and the 2008 election here; it doesn't seem that he looked very hard at the data.

You might think it's a step forward for him to actually plot a graph, as he does in this (drearily typical) new piece: 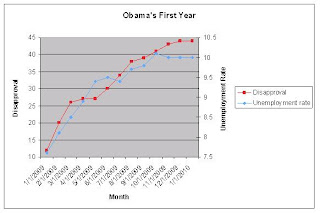 (If the axes are illegible, the red graph is Obama's disapproval rating and the blue graph is the unemployment rate over time.) The analysis, however, is beneath rebuttal:

What I found in Obama’s case is that at the beginning of last fall, when Washington began debating his health care plan in earnest, his level of disapproval began to exceed the rise in the unemployment rate. [Having "established" this Judis goes on to blather about white working class anger re the Cadillac tax.]

But wow, that "analysis" is laughable. He got one call right, possibly by accident, and now he's a prophet.