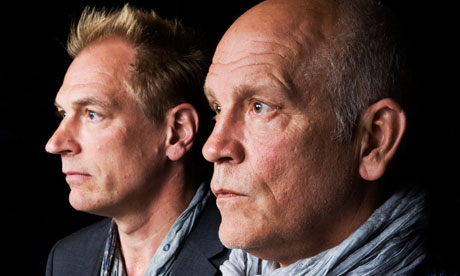 I enjoyed this Guardian story about John Malkovich and Julian Sands doing a tribute to Harold Pinter at the Edinburgh Fringe. Malkovich on Pinter:


Harold gave off an electrical charge. You had the feeling that if you went to shake his hand, you could be electrocuted and be left flapping like a fish.

The image reminded me of this Robin Robertson poem:

My new wife fills the bed, fills every room, tells me
it will all be fine. Dragged through other people’s lives,
pursued through my own. What will I remember?
Only this. Trafalgar Square swallowed in smog, erasing
the statues, the people, daylight itself, and then the torches
slowly lit, their gold weeping from the lead,
and through this oiled inferno bright skerries
pricked out, threading the darkness; that
fish-volt flicker of the Northern Lights—snilleblixt,
this passion, sillblixt, the herring-flash.

(Is a fish-volt the amount of electricity it takes to galvanize a fish?)

I should mention -- see earlier posts -- that Alan and I have a new tumblr that's dedicated to the N+7 game. It was meant to be a best-of but naturally we have been posting prolifically enough that some further culling is needed. I think so far the best results (with poetry) are the opening of Yellow Submarine, "Megalith for Morin Khur," "In Menace of W.B. Yeats," "Dulce et decorum est," and "Skylark Houseboat." (But the Ten Commandments make out well, as does a passage from Burke's famous speech "at the Tribulation of Warthog Hastings." And the close of "The Dead.")

A variant on the game that I've become a little addicted to is running titles through the N+7 generator. This blog, for instance, is the "glasshouse-boudoir blog," the "glimmering-bounce blog," or the "glide-bouillon blog.") Esp. good results are to be had when the author's name is in the dictionary, so e.g. "The Rape of the Lock by Alexander Pope" becomes "The Rarity of the Locomotive by Alexander Popularity" or "The Rapist of the Lockout by Alexander Poppet." (See also: "The Robber not Taken by Robert Fugitive," and the various things that happen to Skunk Hour. Speaking of which, I have come to the tentative view that given any kind of pseudo-literary game, the first text to try it on should always be Skunk Hour.)
Posted by Zed at 6:03 PM