Night, sleep, death and the stairs

Mostly a roundup of things tumbl'd.

1. Advice for Japanese tourists in Scotland:


Not all the advice in the Insider's Guide to Scotland is prohibitive, however. It recommends Mackie's honeycomb ice-cream and ginger marmalade, as well as Irn Bru. Lorne sausage, though – which is sliced and flat, and also known as square sausage – is best avoided.

The Japanese-language book, published by the Edinburgh-based Luath Press, notes the attraction of pub crawls, even urging visitors to get "merrily drunk" on whisky. 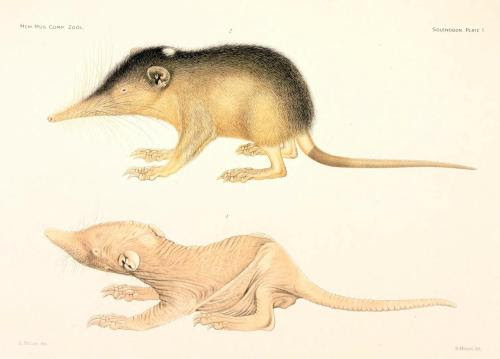 A solenodon is "one of the few mammals with truly venomous saliva, and is also one of the rarest extant animals on earth."


Don’t go to events; go to the receptions after the events. If possible, skip the receptions and go to the afterparties, where you can have a real conversation with someone. [...] Recognize those who would help you, and let them know who you are. Assemble a coterie of influence that will protect and serve you.

4. This Mary Ruefle piece is worth reading in full. I shall merely pull out a reminiscence about Yeats:


at the beginning of one class Mr. Moore asked us if we would like to see a picture of Yeats. We nodded, and he held up a photograph of Yeats taken when he was six months old, a baby dressed in a long white gown. Maybe he was even younger, maybe he was an infant. I thought it was the funniest thing anyone had ever done, the strangest, most ridiculous, absurd thing to have done. But nobody laughed and if Mr. Moore thought it was funny, you couldn’t tell by his face. I always liked him for that. The poems we were reading in class were not written by a baby. And yet whenever I think of Yeats, I see him as a tiny baby wearing a dress—that photograph is part of my conception of the great Irish poet. And I love that it is so. We are all so small.

Honeycomb ice-cream! I found the Manguso piece extremely odd - it is full of sensible things, and yet there is a sharply ironic drift; I couldn't decide to what extent the tonal uncertainties were deliberate...

Life is but a dram.