I have always enjoyed work on pattern formation on the everyday scale; it is heartening (a word I overuse, perhaps revealingly) to see that there is still so much in front of one's nose that bears closer inspection. (See here and here for previous local coverage.) The past few days have been abnormally rich on this front -- three worthwhile stories! -- and I wanted to blog about them, partly for ease of future reference.

There's a new story in Phys. Rev. Focus about hysteresis in soap bubbles. (Like most Focus articles it seems to have been written by a journalist. I also find it irritating that they publish Focus articles a while before the paper comes out, because you've typically forgotten all about the work by the time it's published.) Soap bubbles grown on a triangular-prism-shaped frame form dipyramids that either intersect at a triangle -- for a squat prism -- or are joined by a thin vertical strand of soapy water -- for a skinny prism. For a certain range of aspect ratios both solutions are possible, so as you stretch or contract the sides of the prism, the bubble can take either form depending on which way you were tuning the length (i.e., on the bubble's "past"). This is interesting primarily -- from a physics point of view -- as the most purely geometrical example of hysteresis that I know of: the films try to minimize their area, and in this range the two lowest-area configurations look substantially different.

It is also an excuse to replug a beautiful old paper by the Chicago group on a much more nontrivial example of memory in bubbles -- viz. how air bubbles blown through a nozzle "remember" irregularities in the shape of the nozzle. 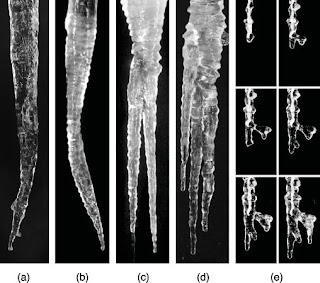 Stephen Morris at the University of Toronto does a lot of beautiful work on pattern formation in systems that are "fluid" in some sense. (My favorite thing on his website is the fluid mechanical sewing machine, but irritatingly that link is broken.) Morris's group has a new paper out in Phys. Rev. E, featured in Physics, on the growth of icicles. They grew large numbers of icicles in their lab and studied how the quality of water, the wind speed, etc. affect the growth of icicles. A result that jumped out at me: lab-grown icicles often have bifurcated tips as in (c) and (d) of the figure, but this seems to happen most often when the fan in the experiment is turned off. The implication is that wind somehow straightens out icicles. 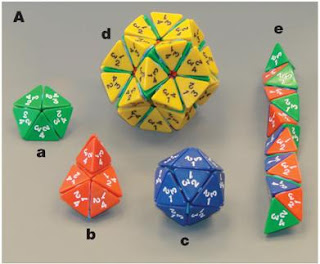 This is somewhat older work that Ross McKenzie recently linked to. Here's an NYT piece on the race to find ever-closer packings of regular tetrahedra. I recommend reading the linked Nature article (journal link here, ungated arxiv here), which is pretty accessible. There is some back-story to this: Stanislaw Ulam conjectured a long time ago that it should be possible to pack any kind of convex shape more closely than hard spheres. As far as I know there is no proof of this, but it's plausible and known to be true for lots of shapes including M&M's (another NYT story) and more recently tetrahedra. How tetrahedra pack is of particular interest as there is a theory of glassiness (see an old post here) that depends rather crucially on the fact that you cannot tile three-dimensional space with tetrahedra. The theory is basically that particles in an incipient solid like to clump into tetrahedra (each particle is exactly as far away as it wants to be from every other) but the tetrahedra can't line up, so that on large scales you have a jammed amorphous mess: here is a PRB paper by David Nelson related to this theory. The Nature paper is prima facie a beautiful application of ideas from physics to solve a purely mathematical problem -- a project that's close to the formalist, interdisciplinary lump of matter I sometimes refer to as my heart -- but its really surprising finding is that one of the best ways to put the tetrahedra together is to have them form a quasicrystal. This actually makes it a little surprising that 3D quasicrystals aren't common in nature, unless tetrahedra are a much less central motif than the Kleman-Sadoc-Nelson line of thinking about glasses would suggest.
Posted by Zed at 7:58 PM