Ciaran Byrne on twitter has been pushing a story from Northern Ireland about a wayward otter: 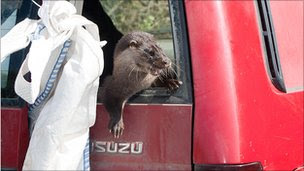 (Image from the BBC.)

The BBC has the clearest report of the events:


Farmer Joe Burke and shop owner Mike Hogan first noticed the animal as it passed by on the footpath outside Mr Hogan's window.
Concerned for its safety, they decided to come to its aid. However, the otter clearly had other ideas.
As a large crowd gathered, the otter became "very aggressive" and started trying to bite people.
...

He took a thick bag used for holding animal feed, and after a minor struggle, managed to capture the animal.
The two men loaded their charge into the back of Mr Burke's jeep, and made their way to a local lake with the intention of releasing the otter back into its natural habitat.
But again the otter was refusing to go quietly.
"He chewed his way out of the bag," said Mr Hogan. "The back window was missing on the jeep so he jumped out when we stopped."
The resourceful animal then made a dash for freedom half a mile back towards Tulla, before Mr Burke was able to catch it under a traffic cone.Mr Burke and Mr Hogan evenually caught the otter under a traffic cone. The men slid a piece of plywood under the cone and carried it back to the lake, where they let the otter back into the water.

Do, however, read the versions in the Sun ("fanged fish-gobbler"), the Irish Independent ("village terrorized by termin-otter"),  JOE ("Psycho Tayto bag otter runs amok in Irish town"), and best of all, the original Irish Sun headline ("Devil otter ate my mini-van").

This story is hopefully on its way to becoming a meme; here, for instance, is a story in the Irish Broadsheet titled "Devil Otter ate our Soccer Panel". Although it is not directly otter-related, I cannot resist posting this highly representative page of the Sun: 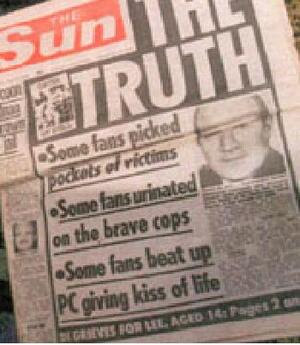