Via Stan Carey, the UChicago press has put the History of Cartography online; I can't view some of the pdfs but this is probably because I'm using an old version of Acrobat. I was esp. fascinated by the chapters on surveying and mapping in the Roman Empire, with all the gromas and dioptras and portable sundials... Something that caught my eye was this bit about digging tunnels and aqueducts:


If [tunnels] were dug from both sides simultaneously, the result might be a near miss, as happened with the Siloam tunnel or that mentioned by Nonius Datus. To avoid this, the Greek mathematician Heron (Hero) of Alexandria, who was evidently writing at some time around A.D.62, shows by a plan the method he advocates. 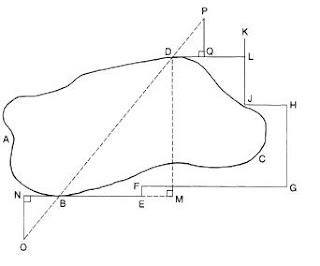 The cartography book gives a rather opaque account of Heron's idea but it's actually quite simple (as Tom Apostol explains). Suppose you want to dig a tunnel from B to D through the amorphous blob that is the mountain. You have to know the angle at which you should be going in. Observe, first, that once you know the lengths of the two legs BM and DM of any right angled triangle (BMD) whose hypotenuse is BD you're in business, because you can construct triangles BNO and DQP that are similar to BMD but lie outside the mountain, so you can construct the lines OB and PD which are the lines along which you should dig. So how do you work out the dimensions of BMD? Heron's idea is to traverse the hillside making only strictly perpendicular turns and keeping track of how far you go. You can work out MD by adding up all the vertical legs, and BM by subtracting all the right-moving from the left-moving legs. Knowing MD/BM, as well as the direction of the lines BM and LD, allows you to construct similar triangles around the edges. [NB the lines are tangents to the hillside in this picture but this is entirely unnecessary.]

According to Tom Apostol, Heron suggested that this was how the tunnel of Samos was built, and for a long time historians accepted this story. The problem with the method is, however, glaringly obvious, once you realize that you've also got to worry about changes in height. (If only because the notion of a right angle only exists in flat space.) The area around a tunnel is typically hilly, which means that the right-angle-making traverse would look something like this:

It should be immediately obvious to any scientist that this won't work at all, barring some incredibly precise way of measuring right angles, because all the little deviations from 90 degrees will add up. Heron's proposed angle-measuring device, the dioptra, was nowhere near adequate:


In practice, each application of such a tool (the dioptra included) necessarily introduces an error of at least 0.1 degree in the process of physically marking the terrain. The schematic diagram on page 33 shows a level path with 28 right angles that lines up perfectly on paper, but in practice would produce a total angular error of at least two degrees. This would put the two crews at least 30 meters apart at the proposed junction. Even worse, several of these right angles would have to be supported by pillars 10 meters high to maintain constant elevation, which is unrealistic. A level path with pillars no more than one meter high would require hundreds of right angles, and would result in huge errors in alignment.

(One wonders, btw, why the Greeks considered it so important to dig a tunnel from both sides.) Heron was a profoundly interesting character, whose other achievements include an extremely useful formula for the area of a triangle, and (most strikingly) the first recorded vending machine:


The first vending machine was also one of his constructions, when a coin was introduced via a slot on the top of the machine, a set amount of holy water was dispensed. This was included in his list of inventions in his book, "Mechanics and Optics". When the coin was deposited, it fell upon a pan attached to a lever. The lever opened up a valve which let some water flow out. The pan continued to tilt with the weight of the coin until it fell off, at which point a counter-weight would snap the lever back up and turn off the valve.


including an entirely mechanical play almost ten minutes in length, powered by a binary-like system of ropes, knots, and simple machines operated by a rotating cylindrical cogwheel. The sound of thunder was produced by the mechanically-timed dropping of metal balls onto a hidden drum.

(As a pioneer of cybernetics, Heron should have known that his tunnel-digging scheme was not self-correcting.)

PS I believe the standard form of the name nowadays is Hero, but my reasons for preferring the "Heron" variant  are too obvious to be worth mentioning.
Posted by Zed at 7:23 PM