I. Was linked on twitter to the Paris Review's old Geoffrey Hill interview; it is perhaps "tl;dr" on balance but there were a few things I liked. One of them, of course, was the bit of fastidiousness quoted above (cf. "Phantasmagoria"). A second was his remark on the painting "St Thomas Confounding Averroes": 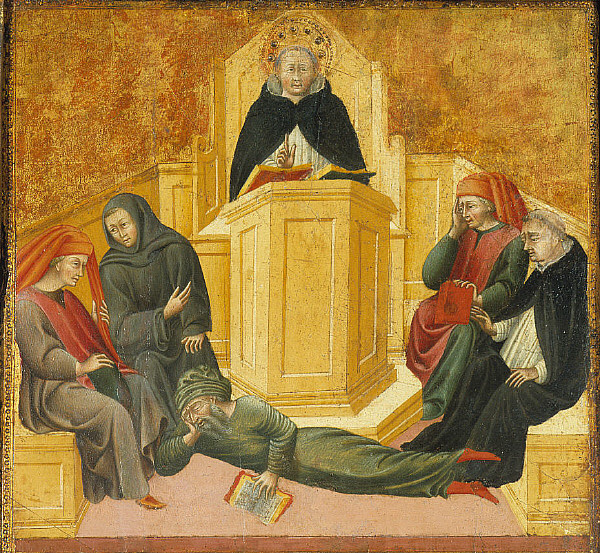 Of which Hill said:

I was delighted by the difference between the little painting as the synopsis described it and what seemed to be the actual situation depicted. If I remember rightly, the synopsis said that St. Thomas is refuting Averroës, and that Averroës is writhing in pain and distress on the floor. Well, to me, he looked very peacefully asleep.

And, finally, a revealing statement about his own practice:

The instrument of expression and the instrument of self-knowledge and self-correction is the same. There is a kind of poetry—I think that the seventeenth-century English metaphysicals are the greatest example of this, Donne, Herbert, Vaughan—in which the language seems able to hover above itself in a kind of brooding, contemplative, self-rectifying way. It’s probably true of the very greatest writers. ... I cannot conceive poetry of any enduring significance being brought into being without some sense of this double quality that language has when it is taken into the sensuous intelligence, and brought into formal life.

I.5. The interview was conducted by Carl Phillips, whose poets.org biography begins with the dramatic observation that "In 1959, Carl Phillips was born."

II. There has been a great deal of word-related linkage lately. Three things that are esp. worth reading:
a. Stan Carey "guddles about" (not sure my prep. is warranted) in the British Library's Evolving English exhibit. He notes in passing that he "described how James Joyce heard a Yorkshire word for earwig – twitchbell – and liked it so much he immediately decided to use it in Finnegans Wake."
b. Friend-once-removed Lissa Minkel provides linkage re the "barbaric yet deeply civilized" nature of the English language. (Stephen Fry, I must confess, I do not find as congenial as I should on paper.)
c. Anatoly Liberman discusses the origins of golf -- the word more than the sport -- and remarks parenthetically that "oaf itself is derived from Olaf, a doublet of alf “elf”." Which is brilliant; Olaf is really an extremely unfortunate name.

III. Related: "the 100 most beautiful words in English." The ones that I like on their list are "vestigial" and "beleaguer." ("Evanescent" would have made it except that it's spoiled for me by being an everyday physics word. But does anyone really like words like "bucolic" and "fugacious"?) I got to the website via Cynthia Haven's blog, where I left a very stream-of-consciousness list:

A class of words I should have included because I have a collective weakness for them: deliquesce, effloresce, acquiesce and the other -esces as verbs. (Some of them as -escences too. Perhaps "excresce" would be a bit much.) I'm also fond of "gibbous" and "accrete," and of "implicative."

I take it that an implicit rule with these lists is that names don't really count; otherwise everyone's lists would consist almost entirely of ornithological and geological terms.
Posted by Zed at 6:28 PM

You may know this song already, but if not I am sure you will enjoy it - it was on a mix tape a friend made for me c. 1991 or so ("Effloresce and Deliquesce":

About "-esce": the OED just disappointed me; there's no verb form for one of my favorite/most topical nouns, obmutescence.

Also, you're right about the geological terms, the definitions of which make good reading; they give the lexicographers a chance to wax both poetic and scientific. (And the etymology of amethyst! "< Greek ἀμέθυστ -ος, prop. adj. ‘not drunken’ ..., applied subst. to this stone (as also to a herb), from a notion that it was a preventive of intoxication.")

Jenny: no, I had never heard that song and would probably have never come upon the Chills on my own; v. grateful for the link. I esp. like that the word "deliquesce" deliquesces in the song.

Calista: I don't see that the lack of an OED entry is dispositive; it is a regularly formed word and one of its forms is attested... I should say that one of the reasons I like the verb forms is that they rhyme with best, rest, lest, etc.:

"The carpenter lay down to rest
After the gulls had obmutesced."

Thanks for the "amethyst" etymology; how very bizarre. The etym. gives the Philip Sidney quotation a completely new meaning:

"The bloudy shaftes of Cupids warre,
With amatists they headed are."