The horizon as a spit 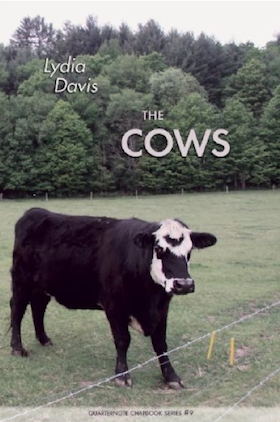 I'm intrigued by Lydia Davis's chapbook The Cows, though it seems daft to pay $10 for 32pp. of observations about cows. A snippet from the Amazon page:


Forms of play: head butting; mounting, either at the back or at the front; trotting away by yourself; trotting together; going off bucking and prancing by yourself; resting your head and chest on the ground until they notice and trot toward you; circling each other; taking the position for head-butting and then not doing it.

I was reminded of a snippet from a Davis interview in the FT a couple of years ago, which I thought I'd blogged at the time but apparently didn't:


a photograph of two cows – standing in the snow like black cut-outs on white paper, staring flatly at the camera. Something about the picture is irresistibly funny.

She sent the photo, she tells me, to her friend Rae Armantrout, a poet, who called her afterwards. “She asked me why I had sent her a picture of two pigs strung up on a spit,” says Davis – and then turns the picture upside down.

I can see what she means; the line of horizon does resemble a wire, and the cows do look a bit like pigs. “It was just one of those confusions,” she says, shrugging.