1. Calista's post on Marvell brings up, at one remove, some more "ambergrease" -- the poem is "A character of Holland," the first two lines are famous, the rest I had forgotten:


Holland, that scarce deserves the name of Land,
As but th'Off-scouring of the Brittish Sand;
And so much Earth as was contributed
By English Pilots when they heav'd the Lead;
Or what by th' Oceans slow alluvion fell,
Of shipwrackt Cockle and the Muscle-shell;
This indigested vomit of the Sea
Fell to the Dutch by just Propriety.
Glad then, as Miners that have found the Oar,
They with mad labour fish'd the Land to Shoar;
And div'd as desperately for each piece
Of Earth, as if't had been of Ambergreece;
Collecting anxiously small Loads of Clay,
Less then what building Swallows bear away;
Transfursing into them their Dunghil Soul.

2. Via Twitter, the most magnificent of drop-down lists, viz. the "salutation" list in the Royal Opera House registration form: 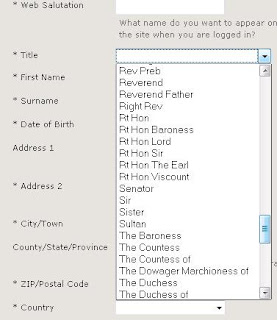 (The only title that competes in length with "the dowager Marchioness of" is "HE the French Ambassador M.")