The Fractal Geometry of Wrinkles 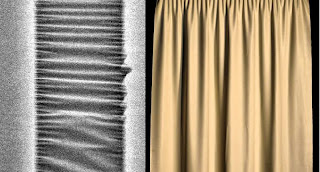 The folds of a curtain tend to grow larger and smoother as you move away from the fixed end; this behavior is generally true of suspended sheets -- they tend to form wrinkles near the fixed ends that turn into larger smoother billows as you move away from the edge. (The picture above, L, is a sheet of two-layer graphene suspended over a trench.) A natural question that this sort of recurring structure brings up is whether, if you took a picture of the region near the surface (i.e., the region with small wrinkles) and blew it up, you'd get something that looked exactly like the region with larger wrinkles -- whether the joints at which wrinkles join and split look the same at all scales, in other words. A nice new paper in PRL ["Wrinkling Hierarchy in Constrained Thin Sheets from Suspended Graphene to Curtains,"  PRL 106, 224301 (2011)] shows that this is indeed the case, and that -- under some weak assumptions -- the average wavelength (crest-crest distance) of the folds scales as the distance from the fixed end as x^(2/3) for light sheets and as x^(1/2) for heavy sheets. ("Light" and "heavy" are defined somewhere in the article...) Here are some of the results: 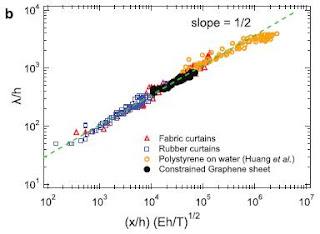 So wrinkling is one of those "universal" phenomena that people in statistical physics are obsessed with (see prev.) -- as evidence for the anti-reductionist view that you can't really explain macroscopic effects in terms of what things are made of, because (e.g.) every large sheet-like object behaves in much the same way and so the microscopic details don't add anything significant to the story.

(1) The new PRL is closely related to a paper that was featured in Phys. Rev. Focus a couple of months ago on the crumpling of paper. The first author on the crumpling paper was the aptly named Robert Schroll.

(2) The new PRL introduces the semi-charming term "wrinklon" for the site at which a wrinkle forks. (Any clump-like or singular feature is a [blank]-on as per standard naming practice, which I think began with "soliton.") One of the experiments they did to study wrinklons was, I thought, very elegant: they took a plastic sheet, clamped one end of it to a surface with serrations at wavelength lambda, and the other to a surface with serrations at twice the wavelength. (So the folds at one end should be twice as tight as at the other; see figure below.)

This trick allowed them to isolate and study single layers of "wrinklons."
Posted by Zed at 11:01 PM