I. Futility Closet provides a handy picture of the philosophers' mad tea party: 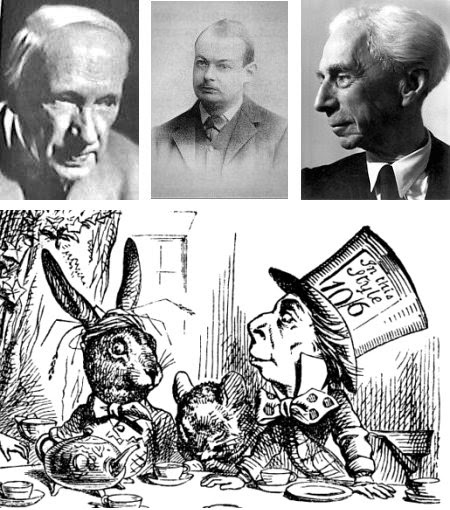 Relevant quote is from Norbert Wiener (although I think Russell's resemblance to the mad hatter had been noted even earlier):


It is impossible to describe Bertrand Russell except by saying that he looks like the Mad Hatter. … [J.M.E.] McTaggart … with his pudgy hands, his innocent, sleepy air, and his sidelong walk, could only be the Dormouse. The third, G.E. Moore, was a perfect March Hare. His gown was always covered with chalk, his cap was in rags or missing, and his hair was a tangle which had never known the brush within man’s memory.

(See also, inevitably: Mr Apollinax. Eliot's juvenilia eventually got published as Inventions of the March Hare but there's no real connection. Also, Moore is not very satisfactory in the pic above. I am unable to find a more tangle-haired G.E. Moore but would welcome links in comments.)

II. Via Fritinancy, a list of words that can be spelled using letter-sequences from the periodic table. (This is not as easy as you might think -- I remember trying it once when I was looking for plausibly-deniable four-letter chemical-formula puns -- as letters that are not elemental symbols include A, D, E, G, and T.) The longest so far is "nonrepresentationalism."

(File under: words with unusual properties.)
Posted by Zed at 12:52 PM