Polarization and the GOP's Future 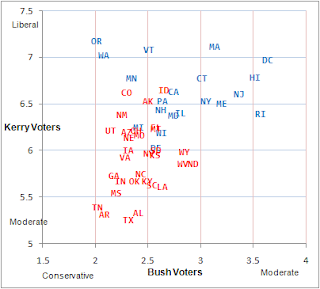 It follows that these shifts are likely to last as long as the GOP retains its current coalition; most of these voters are not really flippable. Roughly speaking, these states consist of (ex-)yuppies, minorities, and hard-right Republicans. (VA and NC have a smattering of old-time "Appalachian" Democrats.) As long as the culture war lasts, the GOP can't peel off yuppies; as long as immigration in the SW and racial issues in the South are on the table, the GOP is doomed with minorities. There's little the national GOP can do about the latter: as long as the states have several hard-right Congressional districts, local Congressmen are going to do things that are perceived as racist, thus discrediting the GOP. Also it's going to be hard for moderate national candidates to win primaries in these states.

Bush and Rove saw this coming and tried to peel off Hispanics; this led to the immigration bill, which caused a grassroots revolt on the right that doomed the GOP with Hispanics this year. If the Democrats do pass an immigration bill, as seems likely -- presumably with McCain and a couple of senators, and over the squawking heads of congressional Republicans -- Hispanics are likely to stay Democratic for a decade or so. As for blacks in VA and NC, they're inaccessible as long as Obama's on the scene; assuming DC, the Research Triangle, and Charlotte continue to grow, these states are going to be hard for Republicans in 2012.

With the upper midwest, CO/NM/NV, and VA off the table, the electoral college is hairy for Republicans even if they win Pennsylvania, Ohio, and Florida, and gain substantially with "soft" Democrats nationwide (say Obama screws up on the economy). This being the case, Ross Douthat's strategy of appealing to poorer social conservatives is not viable in the near term unless, somehow, it can be used to flip Michigan (iffy) or New Jersey (ich don't think so). The intended audience simply isn't living in the right places to make a difference. As far as I can see, the only way out is to appeal to relatively upscale suburban moderates. However, it is not clear that these have enough in common with the Republican base to form a useful coalition.
Posted by Zed at 6:10 PM