John Judis argues in the LA Times that race did matter in this election, just not enough to change it. A good part of the argument is based on a map that Yglesias posted a while ago, showing counties where McCain had outperformed Bush 04, which were concentrated mainly in Appalachia and bits of the Deep South. The obvious inference is that this was because these people wouldn't vote for a black man. I think this inference is problematic because there is no reliable baseline for how Obama should have performed in 2008, if he were white. Here's a graph that illustrates the problem: 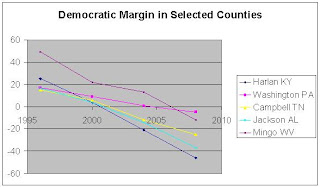 The graph shows Democratic margins in a few randomly selected counties -- all red on Yglesias's map -- from 1996 to 2008. The drop in Democratic vote is surprisingly linear across this period. Now obviously these elections were different, and anecdotal evidence suggests that Obama was hurt by his race, etc. But look at the large drop from Clinton to Gore to Kerry. Either this is a time-series of Dem candidates getting progressively less appealing to the same voters -- a true Southerner, a fake Southerner, a Massachusetts liberal, and then a black guy -- or the voters in these counties are just getting more and more unlikely to vote for a Democratic candidate (demographic change? who knows). These effects are hard to untangle, of course, but I think they make it hard to quantify the notion that Democrats lost any gettable voters by nominating Obama.
Update. More data here.
Posted by Zed at 12:47 PM

Hey, I need a netfiles password and username to see your update.