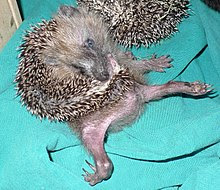 
Hedgehogs are fairly vocal and communicate through a combination of grunts, snuffles and/or squeals, depending on species. Hedgehogs occasionally perform a ritual called anointing. When the animal encounters a new scent, it will lick and bite the source, then form a scented froth in its mouth and paste it on its spines with its tongue. The specific purpose of this ritual is unknown, but some experts believe anointing camouflages the hedgehog with the new scent of the area and provides a possible poison or source of infection to predators poked by their spines.

Looked up because hedgehogs are a Thing on tumblr (see also: here, here). Some other notes:


Research suggests nettle pudding may be the oldest known recipe, dating from 6000BC, closely followed by smokey stew, meat pudding, barley bread and roast hedgehog. [...]  Ruth Fairchild, who led the research, said that however off-putting the Neolithic dishes might sound, many were forerunners of the food we enjoy today.

"The way our ancestors cooked hedgehog - wrapped in a casing of grass or leaves to stop the meat burning - is an early version of many modern recipes which involve meat being wrapped or coated, such as chicken kiev, beef wellington or cornish pasties," she said.

[some dishes] have disappeared from the British dining table, including garum and liquamen, sauces made from fish guts and heads; smokey stew, a combination of bacon and smoked fish; meat pudding, a mix of offal, fat and herbs; barley bread, an early form of unleavened bread; and in mitulis, a Roman equivalent of moules marinière.
Roasted meats (Hedgehog)

"Hedgehog should have its throat cut, be singed and gutted, then trussed like a pullet, then pressed in a towel until very dry; and then roast it and eat with cameline sauce, or in pastry with wild duck sauce. Note that if the hedgehog refuses to unroll, put it in hot water, and then it will straighten itself."

Also tantalizingly recipe-ish is this excerpt from Reliquae Antiquae: " Tak the grees of an urcheon, and the fatte of a bare." Wherefore? To anoint a hedgehog?